Indeed, here we have the JVC Karaoke reviews page

To begin with, Karaoke became popular in Japan first. It stands to reason then, that they had the edge with the technology. Indeed, the karaoke recording companies’ response was to get in on the act. Indeed, JVC is one such Japanese company.

In essence, JVC makes many electronic items. In fact, they always came top on the reliability leagues. That’s because their products were the best. But, what was their karaoke discs like? 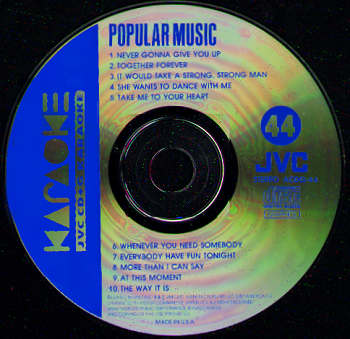 Obviously, with such a pedigree like JVC has, we expect their reputation to shine through in their karaoke venture. However, we karaoke freaks have a discerning ear. Indeed, we know what sounds right. But, there’s much more to karaoke than the sound. For example, there are the on-screen graphics to consider. Thus, should there be a slight mistiming here, they become useless. Also, graphics that are not legible are useless too.

In the first place, we asked members to send in lists of disc ID numbers for the JVC Karaoke Series. Consequently, the following list and song book come from what users sent in to us. Readers will also note that there are two series as follows:

Just to point out the obvious, the two sets of karaoke discs above show disc ID’s of “JVC” and “JV”. In fact, they are in sequence too with no apparent missing discs.

This, of course, is a karaoke collector’s dream. JVC Karaoke discs are also often for sale on ebay. Indeed, they were selling for cheap prices when we done our search. Unfortunately, none of the team bought any because we have our own collection to start with. Indeed, stuffing the shelves out with more karaoke discs doesn’t appeal right now. 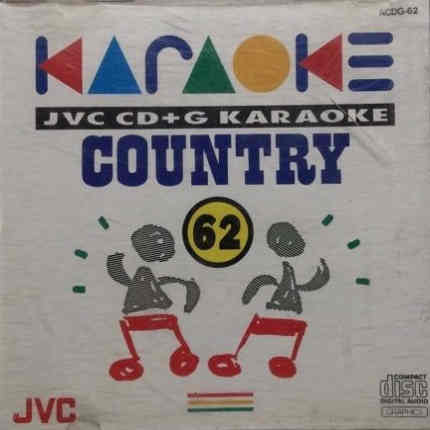 Have you got any of these JVC Karaoke discs still? Moreover, do you still use them? We are looking for a review, brief or full, to explain the music content and the state of the graphics.

Karaoke collectors have an interest in the quality of karaoke discs before they make a purchase and rightly so. In any event, register with Karaoke Shack and give us your experiences with the JVC or JV Karaoke Set.

In short, by registering with our community and exchanging information, you are helping karaoke collectors world-wide. Indeed, should a full set of JVC Karaoke discs come available to buy, collectors need independent views to help them. Obviously, we only allow fully independent opinions. In brief, the Karaoke Shack has had this format from day one. And rightly so! With this in mind, register here today and do your bit.

Obviously, the rating system is still in force as it has for years. This, of course, you may use if you only want to give a quick vote. So, with one or two clicks, even non-members can state an opinion!

Bookmark the home page and pop back from time to time if need be. For starters, we have a full Karaoke Directory too. As a matter of fact, there are song lists that accompany all karaoke labels. So, there is always something to learn and comment on. Also, our chat-rooms are available too for absolutely anything. Not only can karaoke chat be the order of the day, but any other matter!

Finally, our members sent in similar song lists for the JVC series’. In fact, very similar apart from the JV series which had slight variations. However, after sifting through the lists, we compiled a final listing.

Of course, with no new JVC karaoke disc on the horizon, the list will not change. In short, click the link below for the full JVC track listing. 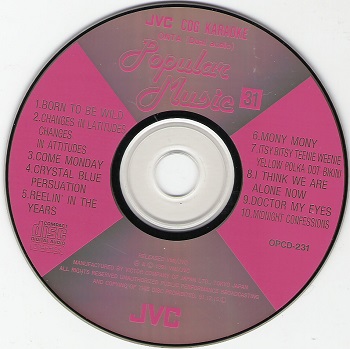 Finally, enjoy your stay at the Karaoke Shack. Also, click the tab above and join the karaoke forum too!