Indeed, here we have the Laughing Gnome Karaoke reviews page

To begin with, this karaoke disc set has tracks neglected by the bigger karaoke companies. The labels also say “Missing Hits”, so that is clearly telling us what their niche is. In brief, hats off to the makers for doing these discs. Just to point out, how many times have you found the same karaoke track on various karaoke disc labels? By and large, this happens regularly, but not with Laughing Gnome Karaoke. Indeed, Laughing Gnome Karaoke stepped in where others failed to do so!

At the present time, we have a list of the disc ID’s but no other information about anything else. The staff at the Karaoke Shack think that these discs are the work of a one man band. In essence, one person and a keyboard perhaps? However, karaoke music rules regardless! Moreover, this set is well worth looking for because the songs have no cover version elsewhere. Consequently, these discs are an important addition to the world of karaoke. In fact, we go as far as saying they are legendary! 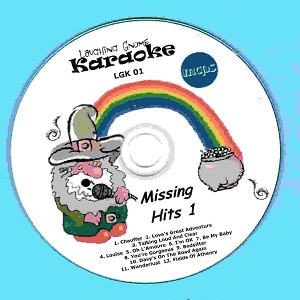 Significantly, one of our karaoke forum members had some of these discs. Although it looks like one was missing from the set.

To clarify, here is the complete list of Laughing Gnome Karaoke discs:

Just to point out that the list has a missing disc because we have had no confirmation of its existence. However, there is a possibility that there was a disc number LGK005 and that the list we got was incomplete.

It could also be that the anonymous member did not have that disc. If you can shed light on the subject then we want to know. 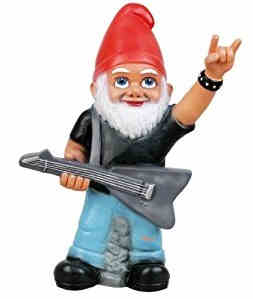 In effect, you can write a small review of the disc series and let us know of the musical quality. Also, what is the state of the on-screen lyrics. Also, is it possible to get a hold of these karaoke discs? For one thing, with such a small collection like this, avid karaoke collectors will want them. Better still, do you have the physical discs and would you like to tell us what they are like? In particular, how do they look and sound. Obviously, from this information, karaoke collectors can make sound choices. Indeed, you may even influence others to seek them out and buy them. 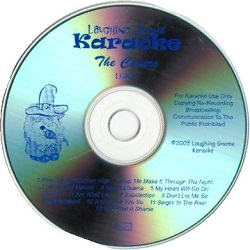 Indeed, the staff here missed out on discs like these while we were gigging. However, they are available on the second-hand market. So, look out for them.

Due to the recent interest in the Laughing Gnome Karaoke Series, we managed to get hold of the song list. So, not only do we have the disc identity, we have the actual presence of the discs maker! Also, we now have the full track listing. Obviously, one day we would hope that the ‘missing’ disc would actually become a reality. In short, click the link below for the new song list for the Laughing Gnome Karaoke set.